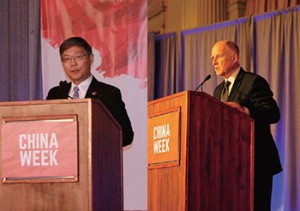 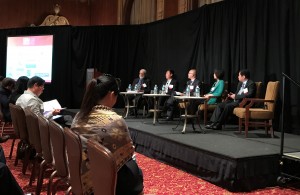 The conversations, moderated by UCCTC founder Dr. An Feng, are a timely reminder of the benefits and opportunities for close cooperation between private and public entities in both the United States and China on renewable energy and clean technology solutions vital to combating climate change. Participants noted that the two geographies have many similarities and synergies in terms of their ambitions and progress. While California implemented the first Cap-and-trade program in the United States, now linked to Quebec; six Chinese municipalities are also implementing their own Cap-and-trade pilot schemes in anticipation of a future national program. Conversely, the large volumes of solar panels produced by Chinese firms, and the manufacturing efficiency achieved by those firms, have contributed to the cost competitiveness of solar energy in California and helped consumers and businesses switch to renewable energy at a lower cost.

Chang Jun, writing in China Daily, says “California has long been at the forefront on China’s battle against pollution and climate change.” The opportunities for collaboration and technology transfer are likely to increase significantly as China ramps up ambition to achieve its 2020 13th Five-Year Plan goals. During the period, the country anticipates spending 2.5 percent of its GDP on environmental issues, Dr. An noted. At current economic output, spending on environmental remediation and clean technology could exceed US$250 billion (1.7 trillion RMB) annually, with the potential to generate significant opportunities for American firms providing clean energy technologies and solutions.

In order to promote environmental technologies and industrial cooperation between China an...